NEW T-SHIRT AND MIX FROM WHYBEEZY 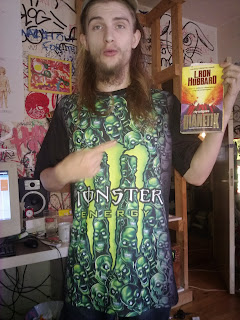 Thx to L.Ron Hubbard for making it possible! And an even bigger thx to WhyBeezy for the t-shirt! Monster energy indeed! ELECTROLYTES!

My good friend Teppop got this awesome track on a burnt cd from a random albanian cab driver. filled to the brim with good music, this track was propably the best song of the bunch.

A record label in a class of its own, Digital Vomit Recordings, is nearing its 100th release.

heres what they have to say about themselves:

"Digital Vomit has always been about doing shit, not just talking about it, which is why we've kicked the arse of certain IDM forums who have had their own artistic aspirations fall after a couple of releases. The problem is, I'd say that we're not really self-promoters, so sometimes the visibility of the label isn't as high as it could be. But I think DV's success speaks for itself really:
- Pioneered new way of organising a label and funding releases
- Over five years without imploding
- Based on my hosting stats, every release (even those with absolutely fuck all promotion) will reliably achieve around 300 downloads
- The most successful downloads exceeded 10k (kid's album 1) and 7k (Aaaaargh!)
- Over 100 releases
- Over 280 artists
- UK's first 8-track release in years (top stuff Lee!)
- Dee Vee Skweee quoted as one of the two must download skweee compilations this year (thanks me!)
- Gigs, T-shirts, badges, ringtones, etc.
Considering that this label is based on a foundation of noise, breakcore, and other extreme sounds, I'd say that's all pretty remarkable."
Indsendt af Unknown kl. 10.03 1 kommentar:

By popular demand, here is the tarraxo set i played @ the lobby of the WhyBeezy show 14 days ago.

Bigup Craxxxmurf for sending huge folder of Tarraxo/Kuduro, could not have done this without your help!

What got me into footwork

Being played this DJ Nate track was the first thing to light my interest:

Another track that really made impressions on me during that timeframe was this one, it not on youtube though:

Then i discovered this track:


TOTAL FUCKING MELTDOWN! I had a minor seizure and had to get all RP BOO tracks the net had lying around. Still a massive RP BOO fan, so i was really pleased when he made a soundcloud profile:

GET A PASSPORT ALLREADY KAVAIN! EUROPE NEEDS YOU MORE THAN WE NEED RASHAD AND SPINN (all respect to them cats, but you be owning them on the regular!)!!
Latest tracks by arpebu

ALLSO IN OTHER NEWS, DJ EARL JUST RELEASED NEW EP ON BOOTYCALL RECORDS, SOME TRULY HARD BANGING STUFF THERE! BEEN WAITING ON THE TRACK "DRAGGED" FOR YEARS SINCE I SAW MANNY WRECKING IT TO THE SONG IN A TALIBAN VID ON YOUTUBE!
Indsendt af Unknown kl. 06.12 Ingen kommentarer:

i am currently collecting enough killer japanese ghettotech cuts to create a mix, so is allways good when you trip upon a new asian footwork producer. even more so when its actually GOOD!
he has a blog as well, allthough as far as i can tell its all about current gigs in his area of japan.
Indsendt af Unknown kl. 04.10 2 kommentarer: